Miles Traveled
Photos Taken
Continents Visited
Countries Visited
Welcome to our website. Read about our recent travels with Postcards, our on-the-road blog; check out a selection of our published stories on the Stories page; or, view a few of our photos in the Photo Gallery. Click on About Us to learn a bit about Janet & Stu. Happy Travels!
Font size: + –
Print
4 minutes reading time (894 words)

Postcard From The Rhone Valley Images of raging torrents, submerged cars, and flooded streets flashed on the breakfast room’s jumbo screen in the Olivia Balmes Hotel, our comfortable and welcoming Barcelona “home.” Though we had a bit of trouble following the Spanish language (or was it Catalan?) narration, the scenes pretty much explained themselves. Mostly reporting devastation in Italy, we didn’t fully appreciate that southeastern France was also hit, and thus failed to grasp that this event might affect our journey.

We were scheduled to board the river cruiser, AmaDagio in Arles, near the mouth of the Rhone River, and disembark a week later upstream in Lyon. However, runoff from the storm caused the Rhone to rise so high AmaDagio couldn’t pass beneath certain bridges, making it impossible for her to meet us in Arles, France as planned. It’s one of the risks, we suppose, of traveling in Europe in November. 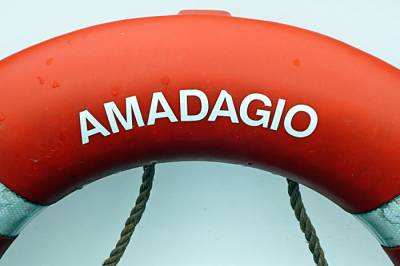 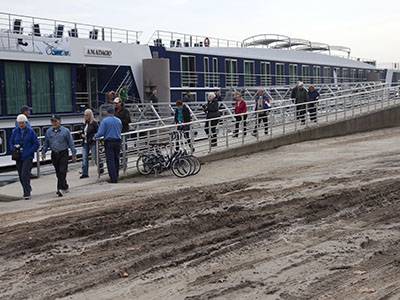 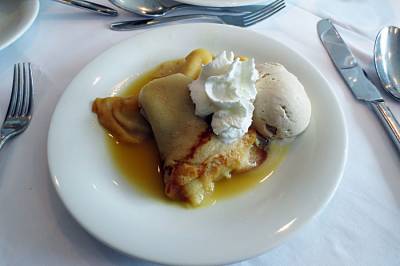 Clockwise: Our river cruiser was the Amadagio; We disembark in mud at Arles; Dessert onboard; Our Captain Dany Boucher.

Notwithstanding the last minute alteration of plans, the cruise went-off without a hitch–testimony to the proficiency of AmaWaterways, the cruise operator. The day before we were to travel by train to Arles, AmaWaterways informed us they would board us in Lyon instead. They did.  AmaDagio managed to just squeak beneath Lyon’s bridges and was waiting for us at Quai Claude Bernard. We cast-off that evening and headed down-river, cruising to Arles and returning to Lyon in the same seven days we were originally going to make the trip one-way.

We necessarily spent more time on the river (mostly at night) and consequently less time in port, but we made every port on the itinerary and had sufficient time in each to undertake all planned excursions. We missed nothing, and enjoyed an action-packed, wine-filled week.

This cruise called, “A Celebration of Wine” lived-up to its billing. Our on-board wine host, Steve Ledson, is a winemaker, grower and winery owner from Sonoma Valley. He led us through tastings, lectured on wine production, worked with the chef to provide a sumptuous wine-pairing dinner, and generously supplied the vessel’s 128 passengers (and some of the crew) with delicious California wines from his cellars. But that was only the beginning.

The stony vineyards of Chateauneuf du Pape and fresh artichokes at Uzes market.

We walked the ridiculously stony vineyards of Chateauneuf du Pape, where growers augment already rocky soil with a blanket of river rock.  Rocks keep the vines warm on cold nights by re-radiating the sun’s energy.  We walked the ruins of the Pope’s New House, crowning its namesake village and appellation, before wandering cobbled lanes to stone quarters of Jerome Quiot, vigneron. Here we sampled a rare white Chateauneuf, a traditional red field blend of 13 grape varieties, and a cuvee exceptionale, a more full-bodied Syrah/Grenache blend.

Parallel experiences rewarded us in Hermitage, a tiny appellation with a big reputation comprising the slopes of a single hill across the river from the village of Tournon; and, near the end of the cruise, in Beaujolais, just north of Lyon. In the latter we sampled the 2014 Beaujolais Nouveau under the tutelage of Jean-Jacques Paire, owner, grower and winemaker, the 16th generation of his family to be so engaged on the same plot! In each of these cases we came to appreciate more than ever the value of tradition in French wine-making. 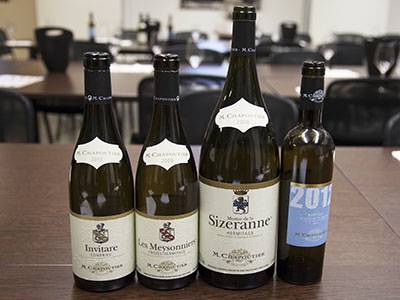 Of course, it wasn’t entirely about wine. There was also food. We sampled artisan olive oil at Moulin a huile du Calanquet a small, family-run operation at the base of the Alpilles, a little east of Arles; shopped a vibrant and abundant farmers’ market in Uzes, west of Avignon; and visited a truffle farm near the village of Grignan near Viviers, where proprietor Serge Aurel entertained and informed our group with delightful enthusiasm. Then there was the culinary staff on board AmaDagio, who consistently prepared and served three excellent meals per day. We enjoyed some truly memorable diners using local ingredients and their exceptional skills, always served with a nice selection of local wines.  “Bon appetit” should have been the motto for this cruise. 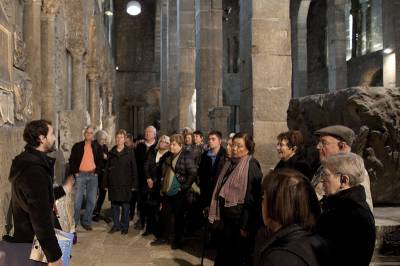 The 2000-year-old Pont du Gard; our tour with Fred in Vienne

Believe it or not, all this eating and drinking did leave a bit of time for sightseeing. Our first visit to the 2000-year-old Pont du Gard left us in awe of Romans’ engineering prowess, while our return to the streets of Arles reminded us of our earlier stay here at a B&B cum cooking school. Here, too the Romans left their mark in the form of a well-preserved, and still used amphitheater.  Of the many excellent and knowledgeable guides, one of our favorites was Frederic (Fred) who led us through the lovely little city of Viviers.  He shared his insightful knowledge, and obvious affection for this very historic place (yes, the Romans were here, too).

Disembarking in Lyon we wished we could have spent another week doing more of the same, but alas, it was the last cruise of the season.

At least we had some time in Lyon and Paris to enjoy. That turned out to be pretty memorable too, as you’ll see in our next postcard.

What a great trip. I will retire someday!

Cancel Reply
What a great trip. I will retire someday!
Cancel Update Comment

What's better than wine and food. So glad you enjoyed it. Wha's next?

Cancel Reply
What's better than wine and food. So glad you enjoyed it. Wha's next?
Cancel Update Comment

Thanks so much for sharing your Rhone Valley adventure. I want to go!

Cancel Reply
Thanks so much for sharing your Rhone Valley adventure. I want to go!
Cancel Update Comment
1
Designed by Formative Studios
Copyright © 2022 Wilsons' Travels