Miles Traveled
Photos Taken
Continents Visited
Countries Visited
Welcome to our website. Read about our recent travels with Postcards, our on-the-road blog; check out a selection of our published stories on the Stories page; or, view a few of our photos in the Photo Gallery. Click on About Us to learn a bit about Janet & Stu. Happy Travels!
Font size: + –
Print
3 minutes reading time (696 words) Living in the 18th Century

Our accommodations for five nights on the 2nd floor of the Thomas Bond House looked out on small plaza. A bronze statue of William Penn occupies the center of the space on South 2nd Street that was once Penn’s home. Our abode was constructed by its namesake Dr. Bond in 1769 and is now operated as a 12-room Bed & Breakfast. It was the perfect base for our Philadelphia visit.

Independence National Historical Park includes a number of sites related to the people, events and time of American independence. Foremost among them, Independence Hall and the Liberty Bell are within a few blocks walk of our B&B.  We were moved to be standing in the room where, during the 2nd Continental Congress, Richard Henry Lee of Virginia proposed that, “these united colonies are and of right ought to be free and independent states;” and where the Congress appointed a committee led by Thomas Jefferson to draft a declaration embodying the sense of Lee’s motion; and where the delegates debated, and on July 2, 1776, approved, our Declaration of Independence.
We’re not sure what it means that 80% of those on our tour hailed from foreign lands. Perhaps those visitors from Europe, Asia, Africa, Australia, Canada and Latin America have greater appreciation for what started here 238 years ago than our fellow citizens who, we’re afraid, may take it for granted. We think a visit here should cure any indifferent Americans.
In addition to Independence Park we visited Betsy Ross’ house (of course), charming Elfrick’s Alley, said to be the oldest continuously inhabited street in the country, and several good restaurants in what they call the Old City neighborhood. We walked around the upscale/gentrified neighborhoods of Rittenhouse Square and Society Hill, and viewed the city from atop City Hall’s clock tower. We found this central part of the city to be lively, diverse and to function pretty well. 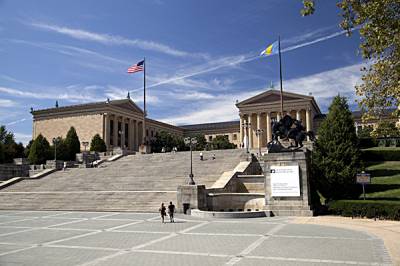 The impressive collection of European Impressionists absorbed much of our time in the Philadelphia Museum of Art, though we also got to appreciate the exquisite craftsmanship expressed in the large collection of Early American (mostly Philadelphia) furniture. We skipped the run up the front steps, a la “Rocky.”
After picking-up our rental car, we spent one day exploring Philadelphia’s hinterlands discovering what else? More American history, though this time in the form of two Revolutionary War sites: Valley Forge, and Brandywine Battlefield. About 30 minutes west of Philadelphia via Interstate 76 (really), Valley Forge National Historical Park proved the least well-marked national park in our experience—signs directing us there were almost non-existent.
Still, once we found it we spent a couple of hours circumnavigating the surprisingly vast acreage trying our best to envision what that tough winter must have been like to endure. We did learn that the ragtag bunch of brave and skillful, but undisciplined fighters for the Patriot cause entering into that encampment developed into a real professional and well-trained army, due, oddly enough, in large measure to the efforts of European aristocrats like von Steuben, and Kosciusko, and Lafayette! 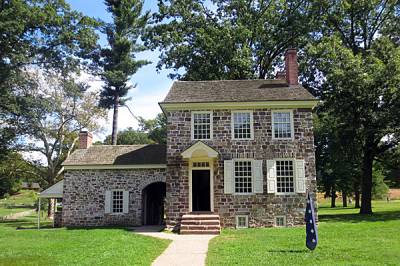 Though Brandywine Battlefield south of Philadelphia is a state park, it proved as difficult to find as Valley Forge, for the same reason—a lack of directional signage. Though the park was a little disappointing we were impressed with what we learned about the battle—the largest of the war, and the only one where the American and British supreme commanders faced one another on the field of battle. Though considered a British victory, the Americans may have suffered fewer casualties and managed an orderly retreat to fight another day—with the help of the a couple of 19-year-olds, the Marquis de Lafayette, and Janet’s four times great grandfather, Adam Albright, a private serving in a Pennsylvania unit.
Next we’re off in search of more of Janet’s paternal ancestors, most of them more recent than Adam.  Keep on traveling, we’ll keep you posted.