Miles Traveled
Photos Taken
Continents Visited
Countries Visited
Welcome to our website. Read about our recent travels with Postcards, our on-the-road blog; check out a selection of our published stories on the Stories page; or, view a few of our photos in the Photo Gallery. Click on About Us to learn a bit about Janet & Stu. Happy Travels!
Font size: + –
Print
4 minutes reading time (787 words) Following advice from the Via Rail ticket agent, we arrived early at the waiting lounge in Toronto's Union Station for our 10:00 PM train for Vancouver. Upon checking-in with the Train Supervisor (Conductor) we realized that while Gail had been upgraded to a double cabin, Janet and Stu were in separate single compartments. We asked to trade our two singles for a double. After checking his computer, the Supervisor agreed to upgrade all of us, and put us in adjoining double cabins. Perfect!

So, after some brief angst, we were off to a good start on our 2775-mile rail journey across Canada. Welcomed aboard with (Canadian) sparkling wine in the dome car, we watched the city lights recede as our 25-car train made its way out of town. One thing we learned on this journey: Ontario is big. We were still in the province as we watched the forest roll-by at breakfast next morning!

We crossed Ontario, and Manitoba and into Saskatchewan during our first 24 hours. On a three-hour layover in Winnipeg we had a chance for a little sightseeing. Janet and Gail took a city tour of the surprising prairie metropolis of 750,000 with a bustling downtown. They checked-out Manitoba's legislative building and beautiful Assiniboine Park's English Garden and sculpture garden. Stu browsed the railroad museum located in Winnipeg's historic Union Station and walked around "The Forks," a National Historic Site adjacent to the station. It's a former trading and commercial center at the confluence of the Assiniboine and Red Rivers. Recently redeveloped, it still serves as a gathering place with market, shops restaurants, cafes and more.

A mid-morning arrival in Edmonton allowed Via Rail to add a special viewing car in the middle of the train with huge curved-glass windows for the journey through the Rockies. This stop also allowed us to de-train and use the suburban station's Wi-Fi. We got to Jasper around 2:00 PM–about 44 hours after leaving Toronto–on schedule, in spite of the frequent need to wait in sidings for fast freights to pass. We had arranged ahead for a two-day layover in the Canadian Rockies. Disembarking in Jasper we picked-up our rental car at the station, bought water and snacks at a local market, and headed south along Icefields Parkway toward Banff. 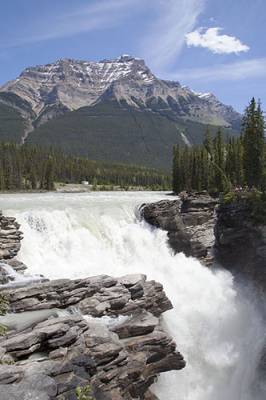 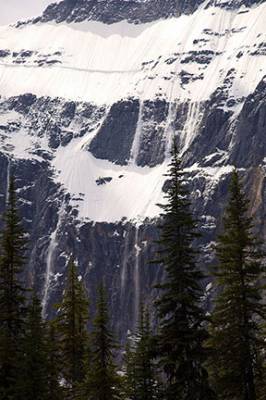 Above: Small Avalanches and white water in the Canadian Rockies

The broad, well-maintained road parallels the continental divide on the east side. We were bracketed by craggy peaks as we drove past rivers, lakes and waterfalls, spotting elk and bear. We passed below the Columbia Icefield and learned at the visitor center that this largest icefield in North America is a source of rivers that flow into three oceans: the Pacific, Atlantic and Arctic.

In Banff, we stayed in a hotel room that lacked–but could have used–air conditioning, and enjoyed walking around the admittedly touristy town. Gail treated us to an especially memorable dinner at The Maple Leaf, where she enjoyed the Maple Leaf Signature Salmon poached in a maple-Dijon syrup and served with prawns. Stu savored another, Asian-themed, salmon dish while Janet appreciated the spinach and goat cheese-stuffed chicken with garlic confit jus. The Blue Mountain Okanagan Valley Pinot Noir was almost as memorable as the entrees.

The next day we made the short drive to Lake Louise. We found the lake's cyan color surreal, even more beautiful than images we'd seen. On our return to Jasper next day, we turned-off on a small side-trip up to the viewpoint for Mt. Edith Cavell, a spectacular sight spawning small avalanches as we watched. 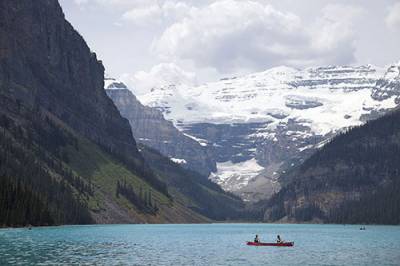 Above: Lake Louise and Banff in the Canadian Rockies

Too soon we arrived back in Jasper to complete the rest of the journey, overnight to Vancouver. We all ordered the rack of lamb for our last dinner aboard The Canadian. Cooked to perfection and accompanied by a nice glass of wine, it was the perfect prelude to a good night's sleep. We arrived next morning a bit ahead of schedule. 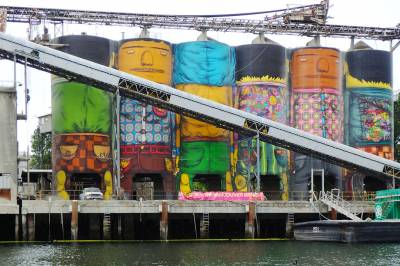 Though our train accommodations were very cozy, the rail journey lived up to our expectations. We appreciated the classic, but refurbished, 1954 Budd cars we traveled in, and were impressed with the new "Prestige Class" service offered in the last three or four cars of the train. These cars had been upgraded with larger accommodations and the beautiful, bullet-shaped Park Car bringing up the rear. Though we were in the less pricey "Sleeper Plus Class," we found a relaxing, congenial atmosphere, an efficient crew, and some great scenery. The food may have been the biggest surprise. It was delicious, perfectly prepared and presented–what one would expect in a fine restaurant–for us, maybe the best part of a good journey.

Happy Travels to all!