Miles Traveled
Photos Taken
Continents Visited
Countries Visited
Welcome to our website. Read about our recent travels with Postcards, our on-the-road blog; check out a selection of our published stories on the Stories page; or, view a few of our photos in the Photo Gallery. Click on About Us to learn a bit about Janet & Stu. Happy Travels!
Font size: + –
Print
5 minutes reading time (1001 words) Approaching Helsinki on a bright sunny morning, we watched rocky, evergreen-studded islands drift by our ship. Cool temperatures, a light breeze, and drifting scattered clouds welcomed us to Finland's capital and largest city. Nautica, tied to the dock in the city center, allowed us an easy walk off the ship and time to explore, but first we boarded a bus for a guided tour.

Our guide, Yana, told us that Helsinki was founded in 1550 by the Swedish king! For over 500 years until 1809, Finland was part of Sweden. From that year until 1917 it was Russian, only gaining its independence by taking advantage of Russia's chaotic revolution. As we drove past the 1952 Olympic stadium where Paavo Nurmi,"the flying Finn,"carried the Olympic torch, Yana explained that Helsinki was now a city of about 620,000. Including the suburbs, the metro area now approaches 1.5 million residents out of a total of 5.5 million Finnish citizens. 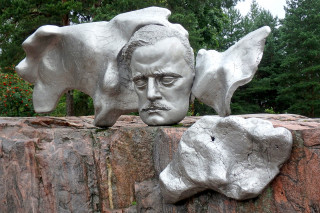 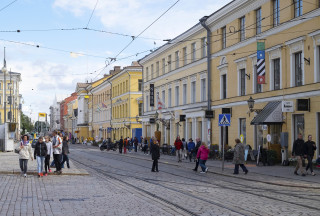 Among the highlights of our tour were a city park dedicated to Finnish composer Sibelius with a sculpture resembling organ pipes, and the Rock Church. This Lutheran Church was literally excavated out of bedrock in the middle of the city in the late 1960s. It seemed an inspiring yet contemplative space, surely a memorable work of design and craftsmanship. Our guided tour finished at Senate Square, flanked by government buildings, the Bank of Finland and the 1852 cathedral. A central statue of Alexander II occupies the square's center. Alexander is known to Finns (as well as Russians) as the "Good Czar," for peace, scientific progress, and the rule of law during his reign. 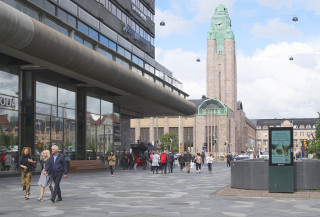 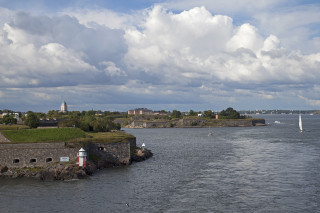 Helsinki: Railway Terminal and view as we depart the city.

We walked back to the waterfront and its open-air market where we enjoyed salmon paella for lunch before shopping among craft vendors. We wandered and window-shopped through downtown before re-boarding Nautica. A showery overcast blanketed the midday, but later in the afternoon the sun returned as we prepared to cast-off. Announcements from the PA system said that one couple had "missed the boat," and sure enough, as our thrusters propelled us from the dock we saw two people frantically waiving from the sidewalk! The captain reversed thrusters and returned to the dock, to retrieve our tardy passengers. Our captain explained, it was for "Karma." A bit late, we set sail for our overnight journey to Stockholm our final port of call. 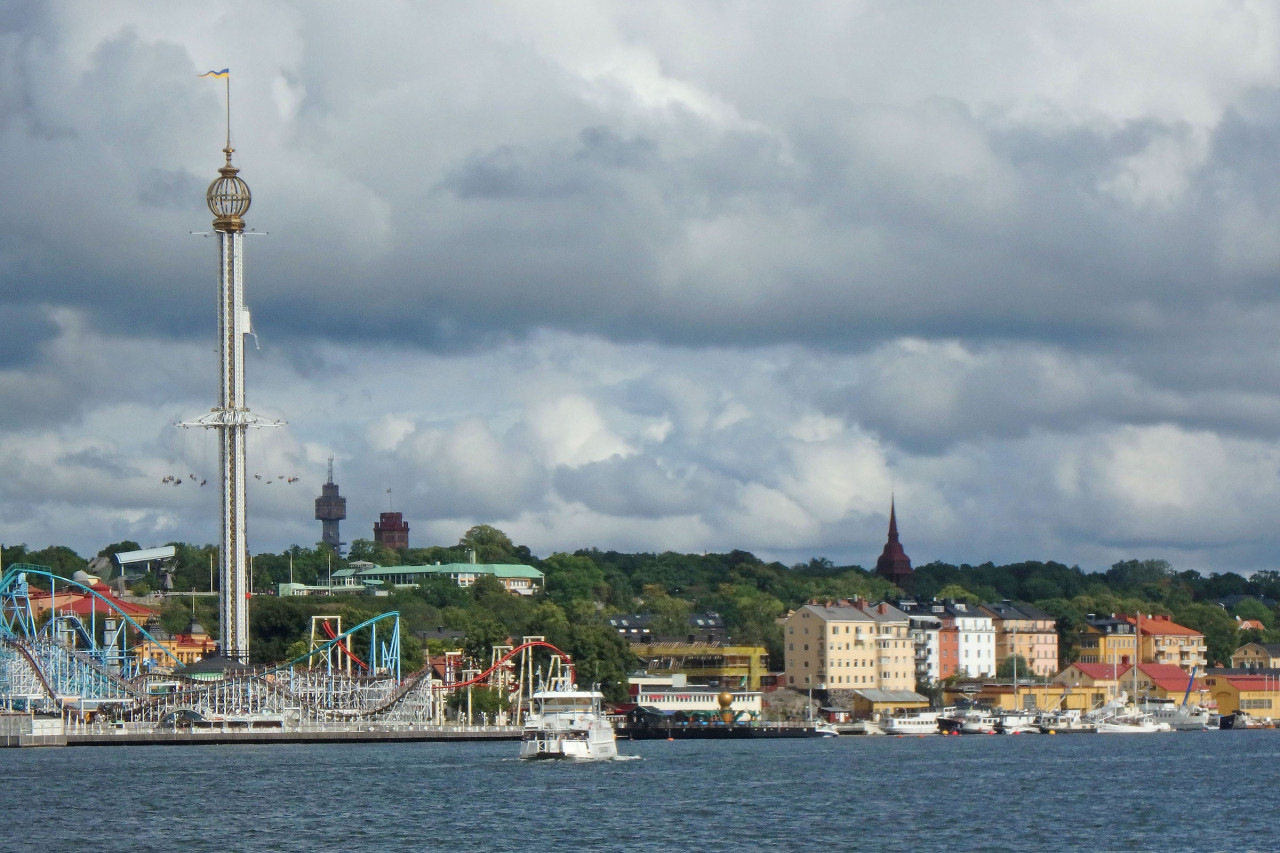 Stockholm, Sweden from the harbor

Our Helsinki guide told us that Viking Lines' overnight ferry to Stockholm was very popular with locals, especially for a weekend getaway. We were definitely looking forward to our time in Sweden's capital. We declined the "extension" in Stockholm offered by Oceania, so we were on our own when we disembarked. After a brief look at our passports by Swedish authorities, we climbed into a taxi and headed into this city of a million people. Arriving at our hotel at 8:30 AM, we didn't expect our room to be ready, but the friendly folks at NOFO Hotel in Sodermalm agreed to store our luggage while we spent the day beginning our exploration in the Venice of the North, a city built on numerous islands. We walked about a mile from our hotel on Tjarhovsgatan to the little ferry terminal to Gamla Stan, the historic center of Stockholm. Here we hopped on one of the small, frequent ferries for a ten-minute ride to Allmanna Grand terminal on Djurgarden Island, a place we nicknamed museum island. Another short walk brought us to Vasamuseet, where an intact 17th century Swedish warship, the Vasa, is housed.

The Vasa, launched in 1627, undertook her maiden voyage in 1628 and promptly sank! The vessel is an incredible sight and the story of its salvage and preservation almost as impressive. We next visited the nearby Nordiska museet, the museum of Swedish cultural history which served-up a decent lunch and offered a view of domestic life in Sweden over the centuries. 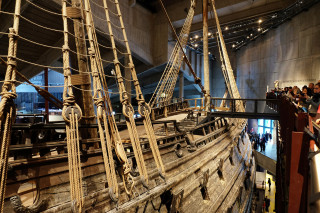 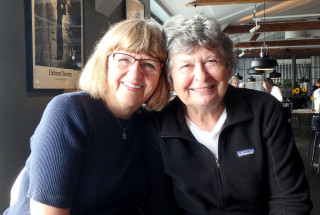 A return ferry and walk brought us to our hotel where we checked-in to our comfortable second floor room and rested briefly before heading out to explore our neighborhood. We eventually stumbled across a restaurant called "The Brickyard," that we'd call a Swedish interpretation of an American-style Bar & Grill. The Burgers and beer were very good, the atmosphere relaxed but lively, and the prices, Swedish.

The impressive breakfast spread at NOFO Hotel was a delightful surprise, but the highlight of our second day in Stockholm–in fact of our entire visit to the city–was lunch with Gudrun and her husband, Leif.

We met-up at the Fotografiska, a photography museum where we toured a photo exhibit of Stockholm's native daughter, Greta Garbo, and an impressive modern art photography exhibit of evocative global scenes. Gudrun is a good friend of our good friend Donna, who acts as our travel agent when we need one. Donna put us in touch with Gudrun and her husband, Leif, who recommended our (excellent) hotel, and arranged our meet-up at the museum. The cafeteria food was very good, the view over the harbor from our table was gorgeous and our company warm and stimulating. Nothing better than getting to know some charming and knowledgeable locals. 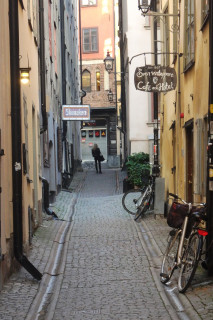 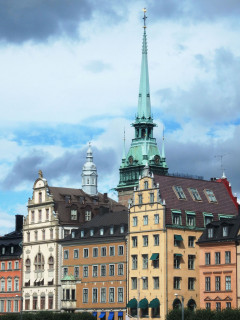 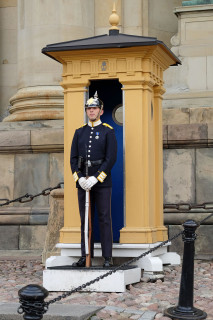 The rest of our day was spent wandering the narrow medieval streets of Gamla Stan, the most historic part of the city lined with unique shops and restaurants. We also toured the enormous Royal Palace on the island. We could easily have spent much more time wandering the streets of Gamla Stan and other neighborhoods. We barely made a dent in the museums, so we felt some regret at having to leave the next day. It turns out the most practical means of transport with luggage to Stockholm's Arlanda Airport is a taxi–convenient if a little expensive. As always, it's nice to be heading home but a little sad when the adventure is over.