Miles Traveled
Photos Taken
Continents Visited
Countries Visited
Welcome to our website. Read about our recent travels with Postcards, our on-the-road blog; check out a selection of our published stories on the Stories page; or, view a few of our photos in the Photo Gallery. Click on About Us to learn a bit about Janet & Stu. Happy Travels!
Font size: + –
Print
5 minutes reading time (950 words)

If Ecuador’s theme was colonial heritage, then Peru’s was pre-colonial. It was Inca. This was particularly true in the Andes where we spent most of our Peru time. The sights tended to be Inca; our guides emphasized Inca history and culture, even when showing us colonial history; and the appearance of the people, the dress, the art, impressed us as indigenous. It opened our eyes to discover that two adjacent South American countries with similar histories could feel so different.

Edwin, our Peru guide, and his assistant Elizabeth, met us at Lima Airport and negotiated our group through Peruvian customs, boarding the proper Cuzco flight with us. After checking into Hotel Jose Antonio Cuzco, we followed Edwin’s recommendation and joined Jenny and Michael for a late supper at Valentina, a traditional restaurant across the street. Delicious soup and chicha mirada!

Colorful women at Sacsayhuaman and cloth in local store

Next morning our local guide Abi conducted us around the area beginning with a couple of Inca sights crowning hills outside of town: Qenko and Sacsayhuaman. The latter, a massive complex afforded a fine view over Cuzco in addition to some extremely impressive masonry. While not built as a fortress, the complex served as one in 1536 when the Inca used it to lay siege to Spanish-held Cuzco, in an attempt to regain their capital.

Back in town, we visited Plaza San Francisco, the large, historic main square in the colonial center, and the cathedral, facing the Plaza. Inside the cathedral, Abi pointed out paintings that, at first glance appear typical of 17th century paintings one might find in European cathedrals. Created by anonymous painters of the Cuzco School, where indigenous artists were schooled in European style and technique, they include a few surprises upon closer inspection: a disciple at the Last Supper with an indigenous—looking face;  a depiction of Mary costumed in a manner to suggest a connection to Pachamama, the Inca Earth Goddess. 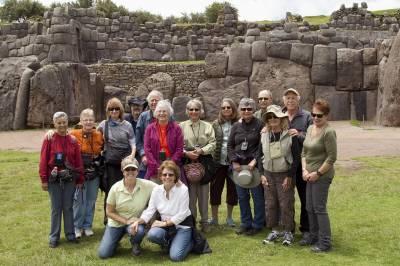 Finally, we toured the Church and Convent of Santo Domingo, built atop the foundations of the Inca temple of Quirkancha, once the most important temple of the Inca Empire. After the convent was damaged in an earthquake, the Inca foundations were exposed and are now a museum. The symbolism was not lost on us: a language, culture and faith may have been erected upon the ruins of another civilization—the indigenous foundation endures.

After an evening meal accompanied by some toe-tapping entertainment, we retired for a night’s rest in preparation for our journey to Machu Picchu next day. A bus through the Sacred Valley with a market stop at Pisac followed by lunch and a tour in Ollantaytampo was mostly missed by Stu because he was suffering from what proved to be a bacterial infection. The train transported us to Aguas Calientes, sort of a “base camp” for Machu Picchu, where Stu’s condition was diagnosed in our hotel by a local physician and successfully treated. 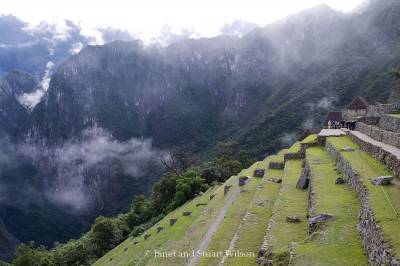 After a seemingly miraculous recovery, Stu joined the rest of our group the next morning for the switch-back bus ride up the canyon wall to the fabled Inca city of Machu Picchu. “City” is really a misnomer, for archeologists reckon that Machu Picchu’s population probably never exceeded 1,000—so more like a large village or small town.  The monumental and exquisitely constructed temples seem far too grand for such a small place, so a religious or royal significance is presumed.

The stone to construct Machu Picchu was quarried on site and the complex was constructed in classic Inca style around 1450. Occupied for only 120 years, or so, it was never found by the conquistadores. Steep agricultural stone terraces fill most of the area adjacent to the complex—sufficient to feed the relatively small population.

While the architecture and plan of the town are compelling, the setting inspires awe. Covering the top of a ridge, at 8,000 feet elevation and nearly surrounded by 1500 foot vertical cliffs dropping to the Urubamba River (a source of the Amazon), Machu Picchu floats in the sky. Morning clouds and mist alternately shroud the mountain view and allow shafts of sunlight to illuminate the scene, or dramatize a nearby peak. Never mind the altitude, the setting and scene will take one’s breath away.

After a morning in Machu Picchu we were obliged to return to earth. We took the afternoon train, followed by a bus, to return to Cuzco for the evening. Our next morning’s flight to Lima arrived mid-day, just in time for a city tour. 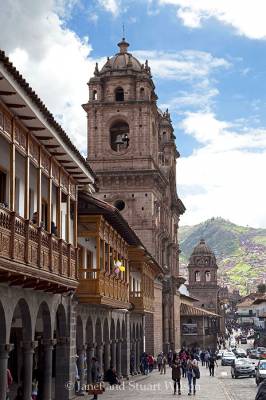 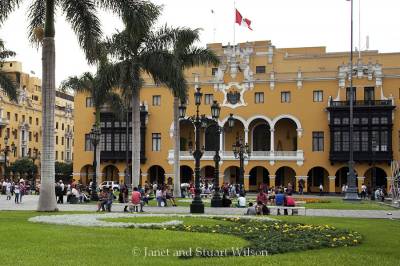 A huge, sprawling city of 9 million, in 24 separate municipalities, Lima somehow seems to work. The Miraflores community, where we stayed, was modern, “first world,” and prosperous. We didn’t tour the “third world” parts of Lima, but mostly the colonial center. Highlights included San Francisco monastery, with subterranean catacombs, and a historic library reminiscent of Hogwarts.

On our final day we were free to wander and we did. With Michael, Jenny and Lanny, we shopped for gifts and souvenirs, and walked the bluff overlooking the Pacific that reminded us of Southern California. We enjoyed a delicious seafood lunch in a stunning shopping center literally built into the bluff.

Lima, Peru and Janet and Stu

At our farewell dinner at La Tiendecita Restaurant near our hotel, we savored delicious food, preceded by a stiff Pisco Sour. Our group was in a celebratory mood, but local patrons as well as the staff seemed genuinely happy for us, sending us home with vivid memories and warm feelings.