Miles Traveled
Photos Taken
Continents Visited
Countries Visited
Welcome to our website. Read about our recent travels with Postcards, our on-the-road blog; check out a selection of our published stories on the Stories page; or, view a few of our photos in the Photo Gallery. Click on About Us to learn a bit about Janet & Stu. Happy Travels!
Font size: + –
Print
4 minutes reading time (843 words)

Arriving in Quito at night, we didn’t get a good look around until we awoke in the morning to find ourselves in the Andes at 9,300 feet elevation, surrounded by 15,000 foot high volcanoes. There are many contrasts between the Galapagos and mainland Ecuador and one of the most pertinent to travelers is altitude. We had prepared for the altitude with prescription medication, staying hydrated, and not over-exerting at first. Still, we noticed a shortness of breath when merely walking, especially the first couple of days.

Rodrigo, our Ecuador guide greeted our flight and together with bus driver Roberto, made sure we arrived safely and efficiently at our accommodation, Mercure Grand Hotel Alameda in a district called La Mariscal. We soon met-up with our second guide, Eduardo and enjoyed the services of two knowledgeable and personable guides. With a population of over 2.5 million, Quito is shoehorned into its mountain valley, shanties and modest homes creeping up the surrounding slopes. Its colonial center was one of the first World Heritage Sites. 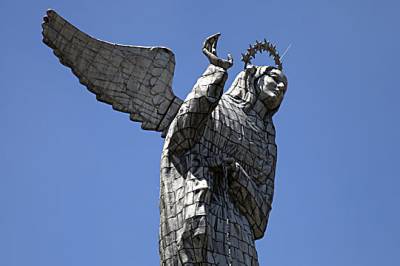 Our half-day city tour with Eduardo (we split into two manageable groups, Eduardo guiding one and Rodrigo the other) started with a visit to El Panecillo, a prominent hill just south of the colonial center. At its 9,900-foot crest, a park crowned by a striking, 45-meter metal sculpture of a winged Madonna called “Virgen de Quito” offers panoramic views. We were told it’s the only winged Madonna, and it has become emblematic of Quito.

We then descended to one of the largest and best-preserved colonial centers in Latin America. We first toured the Iglesia y Convento de San Francisco, a magnificent complex erected on the foundation of an Inca temple and begun in 1534, the year Quito fell to Spanish Conquistadores. This church houses a small 18th century carving also known as the “Virgen de Quito.” It served as the model for the sculpture standing guard atop El Panecillo.

After a visit to Iglesia de la Compañia de Jesus with its interior decoration representative of the Quito School of indigenous artists and its gold leaf adornment almost blinding, our tour concluded with a visit to Plaza Grande.  Here we peeked into the Government Palace, Ecuador’s Executive Office Building.  Though no longer the Presidential Residence it serves the other functions of Washington’s White House, and with far less security. The Plaza is enveloped on its other three sides by the Bishop’s Palace (now a commercial venue where we enjoyed lunch), a modern City Hall, and Quito’s Cathedral. 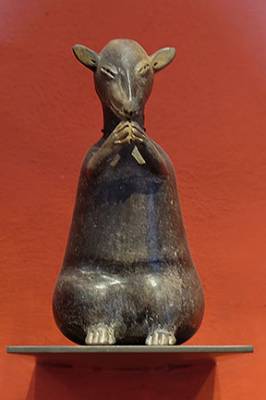 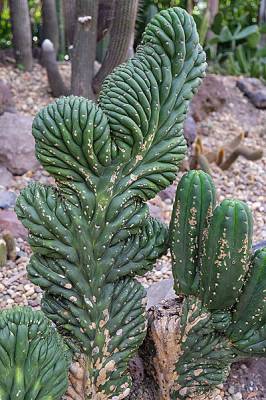 The Pre-Columbian Museum and the Botanic Gardens

We spent a free day in Quito while many of our fellow travelers headed for a rain forest excursion. At our hotel desk we hired a taxi and visited the Botanic Gardens in Parque La Carolina where we observed a great variety of orchids, cactus and several carnivorous plants. We then headed back to the colonial center to tour Museo del Casa del Alabado, a pre-Columbian art museum located in a traditional colonial home with interior courtyard. Here we lingered over exquisite pottery, metal work and other pieces beautifully displayed in an historic setting. An evening stroll in our lively La Mariscal neighborhood with Jenny and Michael yielded some ice cream and a delightful end to a pleasant day in a charming city.

We slept one night at Hacienda Pinasqui in Otavalo, about 60 miles north of Quito. We wish we could have stayed longer. This historic property just outside of town was peaceful and accommodating. We hit the famed Otavalo indigenous craft market first thing and managed to find some beautiful hand-woven scarves from among scores of vendors.

Laguna de Cuicocha, Ecuador’s “Crater Lake” is located on the slopes of Cotacachi Volcano just west of the small town of Cotacachi. It’s a rare and interesting sight though not comparable to Oregon’s version in size or scenic beauty. We enjoyed the small “leather” town of Cotacachi, where we strolled the streets, tasted maybe the best latte ever, and fortified ourselves at lunch.

Our final Ecuador experience involved, what else, a stop on the Equator, We came to a place called Quitsato, a monumental sundial, constructed precisely on the Equator. Here we learned that pre-Columbian people had constructed observatories nearby that suggest they, too could locate the equator with accuracy, if not satellite precision. The significance for the traveler of this location includes the year-round spring-like weather at 9,000 feet on the Equator—so, travel to Ecuador whenever you like, it will always be welcoming. 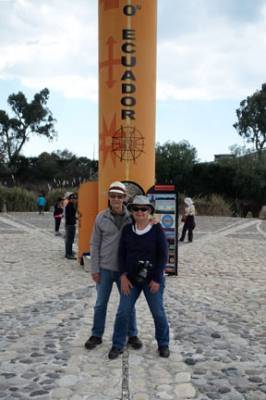 Happy Travels from Stu and Janet (at the Equator)

Note: click on any image to see a larger version