Miles Traveled
Photos Taken
Continents Visited
Countries Visited
Welcome to our website. Read about our recent travels with Postcards, our on-the-road blog; check out a selection of our published stories on the Stories page; or, view a few of our photos in the Photo Gallery. Click on About Us to learn a bit about Janet & Stu. Happy Travels!
Font size: + –
Print
4 minutes reading time (859 words)

When we signed-up for a tour of the Galapagos Islands we imagined ourselves aboard our vessel, following in Beagle’s wake and mimicking Charles Darwin’s observations ashore. That’s not quite how things unfolded, though our five days in the archipelago proved as unforgettable as we’d hoped.

Our group of about 30 others was mostly from California’s Sierra foothills and organized by local veteran traveler and group leader, Lanny. He worked through Go Ahead Tours to arrange the itinerary, including the Galapagos, mainland Ecuador and Peru, international and local air transportation, accommodations, local guides in each country and more.

Our guide Alejandro and a giant tortoise

“They’re turtles—turtles that live on land.” Alejandro was referring to the giant, helmet-shaped shell only a few feet from where we stood, with a head peering from beneath eyeing us warily. Commonly known as the Giant Galapagos Tortoise, these remarkable creatures are the namesake of these legendary islands. Alejandro said that the name tortoise was given to these animals by British Royalty because they didn’t like the sound of “turtle,” but that they were in fact turtles.

Much of what we learned came from Alejandro, our Naturalist Guide with the Galapagos Islands National Park. Based aboard Galapagos Legend, our “Beagle,” he led a Zodiac full of a dozen intrepid explorers—dubbed “The Boobies”—on each of our shore excursions. He shared his knowledge, and his particular point of view, on the Islands’ geology, natural environment, wildlife, climate, ocean currents and much more. For example, he suggested the Islands should be called the Iguanas (rather than Galapagos) because the marine variety especially is so numerous and so compellingly illustrates the process of natural selection.

One of the excursion boats from our ship and a land iguana.

The Galapagos, a volcanic archipelago of 18 or so islands straddling the equator 600 miles off the coast of Ecuador, are associated with Darwin. His 1835 visit here led to the publication, more than 20 years later, of the seminal work, On the Origin of Species developing the theory of Natural Selection. Darwin’s careful observation and collection of a variety of species on these islands led eventually to his conclusions.

In 1959 the Ecuadoran government declared 97.5% of the islands’ area as Galapagos National Park, and in 1986 established a 27,000 square mile marine reserve surrounding the islands. The islands are a UNESCO World Heritage Site and Biosphere Reserve. 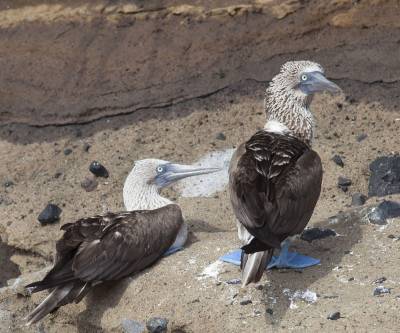 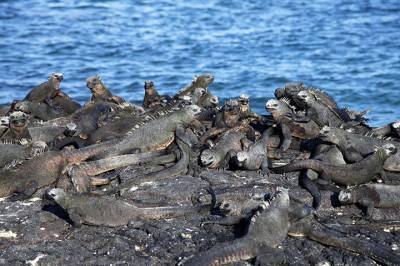 Two blue-footed Boobies and Marine Iguanas in the sun.

On various excursions we hiked and snorkeled and observed a great variety of wildlife, in many cases endemic to the Galapagos. In addition to iguanas and giant tortoises, these included green sea turtles, Galapagos sea lions, colorful tropical fish such as parrot fish, and many, many birds—Galapagos penguins, flightless cormorants, Galapagos hawks, flamingos, heron, finches, mockingbird, tropic birds, frigate birds, gulls, pelicans, albatross and boobies of the blue-footed variety. Endemic plants abound, including the lava cactus we thought resembled the cholla of the Sonoran Desert, but growing on bare lava rock!

During each excursion “The Boobies” (people, not birds) were conscientious (with an occasional reminder from Alejandro) about adhering to the many park rules: don’t touch animals nor approach closer than six feet (they never learned to fear humans and don’t flee); no flash photography; stay with the group and always on the trail; bring no food onto the islands; collect nothing; observe—do not disturb. Standard excursion gear included sunscreen, insect repellent, sunglasses, hats, water and camera. 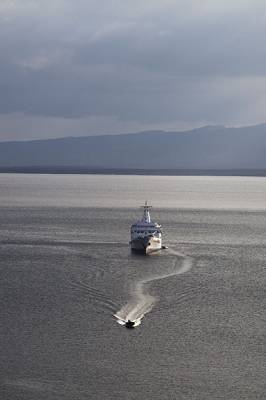 Stu and Janet on our excursion boat and the Legend, our home in the Galapagos.

We can confidently say that our life aboard ship was far superior to that aboard Beagle—beginning with the Dramamine patches we wore. Poor Darwin reported relentless sea sickness when aboard and we experienced none. The dining room provided buffet breakfast and lunch with a variety of hot and cold dishes, always including fresh fruit and the table service dinner offered choices of fresh, tasty and well-prepared entrees and desserts.

Our comfortable beds on the Sea Deck perhaps provided too much intimacy with the engine room below, but we were usually so tired that sleep fell quickly. We enjoyed the hot showers, and especially the informative lectures from the naturalists. The rear of Sky Deck houses a plunge pool and open-air bar for drinks before dinner, and on one occasion, al fresco dining hot-off the grill. One evening, the upper, or Moon Deck hosted star-gazing on a moonless night where Alejandro pointed out numerous constellations in the Equatorial sky unfamiliar to us northern hemisphere dwellers.

Michael and Stu at dinner on the Sky Deck.  We explore the black lava.

It seems earlier visitors to the Galapagos perceived the islands as a barren, inhospitable home to ugly, grotesque creatures. Though sometimes called the Encantatas or Enchanted Isles because of a tendency to disappear in the frequent fog and mists, we found a truly enchanting place revealing nature at its most elemental.