Miles Traveled
Photos Taken
Continents Visited
Countries Visited
Welcome to our website. Read about our recent travels with Postcards, our on-the-road blog; check out a selection of our published stories on the Stories page; or, view a few of our photos in the Photo Gallery. Click on About Us to learn a bit about Janet & Stu. Happy Travels!
Font size: + –
Print
5 minutes reading time (908 words)

Alaska Postcard #1 - Ketchikan and Sitka on the Inside Passage

We didn’t have to wait long after we arrived at the head of Redoubt Bay.  A very large brown bear appeared momentarily from out of the trees, looked at us and then disappeared.  Reappearing moments later, he looked around unconcerned and walked deliberately across a large rock and into the water, swimming swiftly across a narrow channel and procuring a silvery meal enroute before climbing out and marching into the trees again. Our fingers hardly left our camera shutters the whole time.  Welcome to Alaska!
Jim Seeland skippers a smallish, but sturdy and comfortable cabin cruiser around Sitka Sound, along Alaska’s Inside Passage, expertly guiding visitors to close-up looks at spectacular scenery and wildlife.  We spent three cool and sunny hours on the sound witnessing close hand a humpback whale surfacing and blowing, several bald eagles perched on trees or flying, sea otters floating contentedly on their backs, harbor seals sunning on rocks, and at the very last, one very large Alaskan Brown Bear (known elsewhere as Grizzlies).
We’re on a three-week trip with Janet’s sister Gail cruising through Alaska’s Inside Passage on ferries, then on to Anchorage, Susitna, Denali National Park, Talkeetna and Kodiak Island.  In between and along the way we are working on family history with Janet and Gail’s cousin Karen and her husband Ish.  On this first leg we explore Ketchikan and Sitka.
Sitka, our second port of call in southeast Alaska, exceeded our expectations, as did our first stop, Ketchikan. We arrived in Ketchikan on Alaska Airlines via Seattle and got a good look at the small town hugging the shore.  On advice of our innkeepers we met the water taxi driver at the terminal where an 18 ft. aluminum outboard took us to a dock across the street from the New York Hotel, our cozy home while in Ketchikan.
Said to be the rainiest town in the U.S., Ketchikan turned out bright and dry for us.  Our water taxi passed a departing cruise ship so when we arrived the town was quiet.  We enjoyed the peace and evening sun as we wandered along the plank sidewalks of Creek Street, perched above the creek. 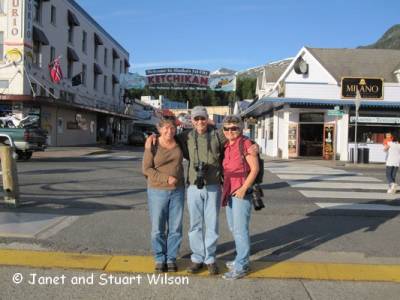 One afternoon, we flew to Misty Fjords National Monument. Our 30-year-old pilot, Ryan took his 50+ year-old plane expertly off from the channel along Ketchikan’s waterfront.  Circling above town he climbed steadily across Revillagigedo Island and the Behm Canal (a huge fjord) to a rocky promontory presenting an almost vertical, 2000 ft. face above the sea.  He flew us close along the sheer face of the wall before circling back over the top, then flew close to a small herd of Mountain Goats atop a nearby rocky peak.
Setting his Alaskan Air Tours float plane’s pontoons gently down on the surface of Big Goat Lake, we taxied to a rocky islet where we deplaned to stretch our legs and soak-in the scenery.  Departing in the opposite direction, we flew low over the lake until the mountain dropped away suddenly, the outlet stream falling 1,000 feet to the glacier-carved valley below.  It was a literal breath-taking moment, representative of the rugged country.
That evening the Alaska Marine Highway System ferry Taku transported us from Ketchikan to Sitka, departing the former at 10:30 P.M.  Thus, we went promptly to sleep in our snug cabins.  We set our alarms for 6:00 A.M. to catch the views winding through the Wrangel Narrows between Mitkoff and Kupreanof Islands.  The ferry slowed in places and we observed fishing cabins and even a fishing lodge along the shore.  We spotted a couple of whales en route from Petersburgh (an appealing fishing town) to Kake (an isolated Indian community).
Perhaps the most spectacular segment of this voyage awaited our approach to Sitka through Peril Strait, Neva Strait, and Olga Strait.  At dusk, green and red markers glowed in the deep shadows of abrupt slopes, adorning the route like jewels.
Sitka, Alaska’s most historic town, was Alaska’s Russian capital (known as New Archangel), the site of a pivotal battle between Russians and the native Tlingit People, home of the Russian Orthodox Cathedral in Alaska, and place of transfer to American sovereignty in 1867.  The name Sitka, appropriately, is an Anglicization of the Tlingit name for the place–Shee Atika–meaning far side of the island.  Sitka sits on the Pacific shore of Baranof Island.
Sitka National Historic Park encompasses the site of a Tlingit fort and of the battle with the Russians, plus the Russian Bishop’s House in downtown Sitka.  We liked the Tlingit Totem Poles that dot the trail through the park, and we especially enjoyed our tour of the Bishop’s House.  The Church sold the house–in bad repair–to the government in 1972 and the Park Service has painstakingly restored the 200 + year old structure. Construction details give evidence of Tlingit, Russian and Finnish boat wright’s techniques.  Russian Orthodox Bishops occupied the residence until 1969.
We booked passage on the fast ferry from Sitka to Juneau, scheduled to depart at 1:30 P.M. the next day, but discovered as we checked out of our hotel that the ferry had mechanical problems and would not run that day and all the Sitka hotels were full....

No comments made yet. Be the first to submit a comment
Designed by Formative Studios
Copyright © 2022 Wilsons' Travels